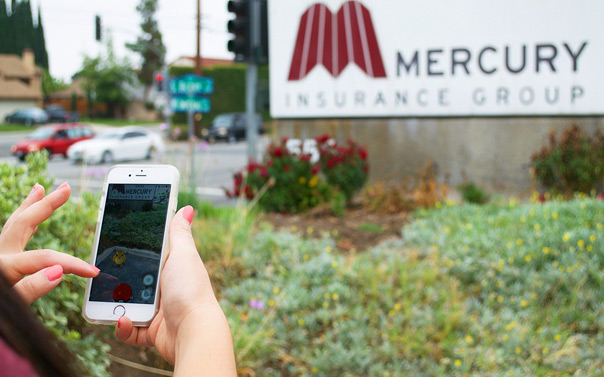 Pokémon Go, a revitalization of the popular ‘90s cartoon and game, has gone viral. Tapping into ‘90s nostalgia, the mobile app has garnered more than 15 million downloads since its initial release, according to USA Today. Hordes of frenzied Pokémon trainers are crowding the streets, navigating an interactive, augmented reality game space in a mad dash to catch them all.

The app alerts trainers about the presence of new Pokémon, Pokégyms (designated areas where trainers can meet with other trainers to battle their creatures and gain experience) and Pokéstops (areas where players can replenish supplies and obtain special items). One such Pokéstop is close to home for Mercury, at the base of a large statue outside one of our buildings in Brea, California.

Niantic, the publisher of Pokémon Go, has included a safety disclaimer urging users to Pokémon responsibly and maintain awareness of their real-world surroundings. However, news headlines show this warning may not being taken as seriously as it should. To promote public safety and address concerns that have risen surrounding the game, here are six quick tips.

Pokémon Go has a built-in safeguard preventing drivers from playing the game when they are traveling over 10 mph, but this hasn’t stopped Pokéaddicts from staring at their phone screens while they’re on the road. Drivers are simply slowing down to continue playing the game. Arizona and Colorado are urging people not to play while driving, displaying the message alongside state highways. The National Highway Traffic Safety Administration is also concerned about the mobile game and distracted driving, sharing a series of Twitter posts warning drivers to put down the game because “no catch is ever worth a wreck.” Distracted driving is a dangerous habit, so resist the temptation to Pokémon and drive.

2. Look Both Ways Before Crossing the Street

Pokémon and walking can be just as perilous as distracted driving. Practice good etiquette when you’re in pedestrian-heavy areas and periodically take your eyes off the screen to avoid bumping into people. If you’re traversing the city, be mindful of traffic – don’t jaywalk, use established crosswalks and look both ways before crossing the street. It’s also important for drivers to stay alert, and watch for pedestrians who may absent-mindedly wander into the street or who aren’t paying attention while playing the game in a crosswalk.

3. Be Aware of Where You Are

Pokémon Go creates a virtual world for aspiring Pokémasters to navigate. Players travel to landmarks and parks in search of rare Pokémon, and while being outside and walking is more beneficial to your health than playing video games at home, a handful of people have already been injured because of their lack of situational awareness. Robbers are even baiting game users by dropping virtual items to lure them to specific locations.

Always pay attention to your surroundings, especially when walking on uneven ground. Keep your eyes peeled for “no trespassing” signs and posted private property. Many areas have park closures after dark, so be aware of these rules.

Think first. If the game directs you to a dangerous neighborhood at night, make the safe choice. Remaining present and grounded in the real world will help you avoid unnecessary injuries and confrontations.

Is your property located on a Pokégym? If so, you may have players flocking to your yard to battle it out. You might even play the game yourself and decide to hold organized battles between the different gyms. Regardless, it’s important to respect the law, people’s privacy and understand the potential risks. If you are injured while trespassing on someone else’s property, the property owners can’t be held liable. If you extend an invitation to players or hold an event on your property, you are responsible for any injuries that may occur to them. Review your homeowner’s policy and make sure you’re covered or consider adding Umbrella insurance, which will cover bodily injury to others as well as damage to your property.

Most employers aren’t keen on paying their employees to Pokémon Go while they’re on the clock. Unless your workplace is Pokémon-friendly, you may want to reconsider trying to catch that Squirtle in your cubicle.

It’s not just the millennials who are crazy over Pokémon – people of all ages are downloading the app. There are additional safety considerations for younger children, who may be less aware of the dangers around them. Pokémon Go is advertised as suitable for all ages, but due to privacy and safety issues, Common Sense Media has given the game a rating suitable for children ages 13 and up. Younger children playing the game should be supervised.

Pokémon Go is doing a tremendous job of encouraging gamers to get outside, promoting exercise and the exploration of new places, but remember, you should always Pokémon responsibly.