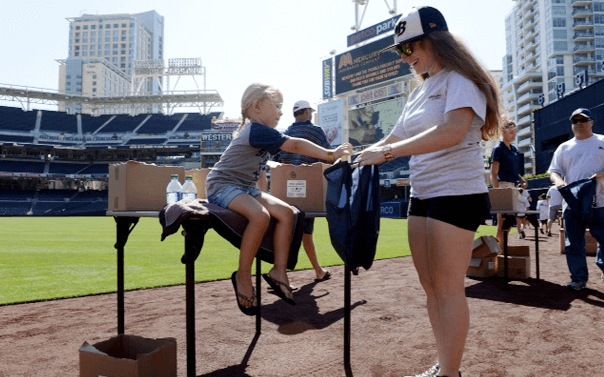 Fireworks and backyard barbeques with family and friends are traditional Fourth of July celebrations. On the second of July, Mercury employees, agents, little leaguers and San Diego Padres players had their own special Independence Day gathering at Petco Park when a “packing party” was organized to assemble 1,000 care packages for Marines from Camp Pendleton and sailors from MCAS Miramar stationed in Afghanistan.

Monica Nungaray and Melyssa Jones, Mercury employees who organized the first “packing party” in 2008 were at the event. “Many Marines and sailors never even receive a piece of mail, let alone a care package,” said Nungaray. “They risk their lives and endure harsh conditions every day, so the least we can do is provide a little touch of home to let them know how much we appreciate their service.”

Each package contained a Padres backpack, hat, notecards and baseball, along with a box of Cracker Jack and much needed toiletries. Accompanying these care packages was this letter from Mercury founder and board chair George Joseph:

I have admired the great men and women in our U.S. military since I served as a B-17 navigator during World War II.  I know first-hand the sacrifices members of the armed forces and their families make to defend our freedoms.

This is one of the reasons I’m especially proud that Mercury Insurance has partnered with the San Diego Padres to send you care packages during your deployment.  We are proud of you and know it’s not easy being away from family and friends, so we wanted to provide a little “touch of home” to let you know we appreciate your service.

Every American is indebted to the soldiers who protect our country, and it’s heartwarming that the company I founded more than five decades ago continues to contribute to the cause.  Our annual “Packing Party” began six years ago as a little gathering in our Camarillo, Calif. office at the behest of an employee – Monica Nungaray – whose son, SGT Raul Nungaray Jr., USMC, was sent to Afghanistan then continued to serve in Operation Iraqi Freedom right after the terrorist attacks of 9/11/2001.

Now we have volunteers spread across the Petco Park outfield bundling supplies for shipment overseas.

I would also like to extend a special thanks to the Padres organization, which helped organize everything, the Mercury employees and agents who volunteered for the event, and the San Diego little leaguers who helped stuff all of the packages.