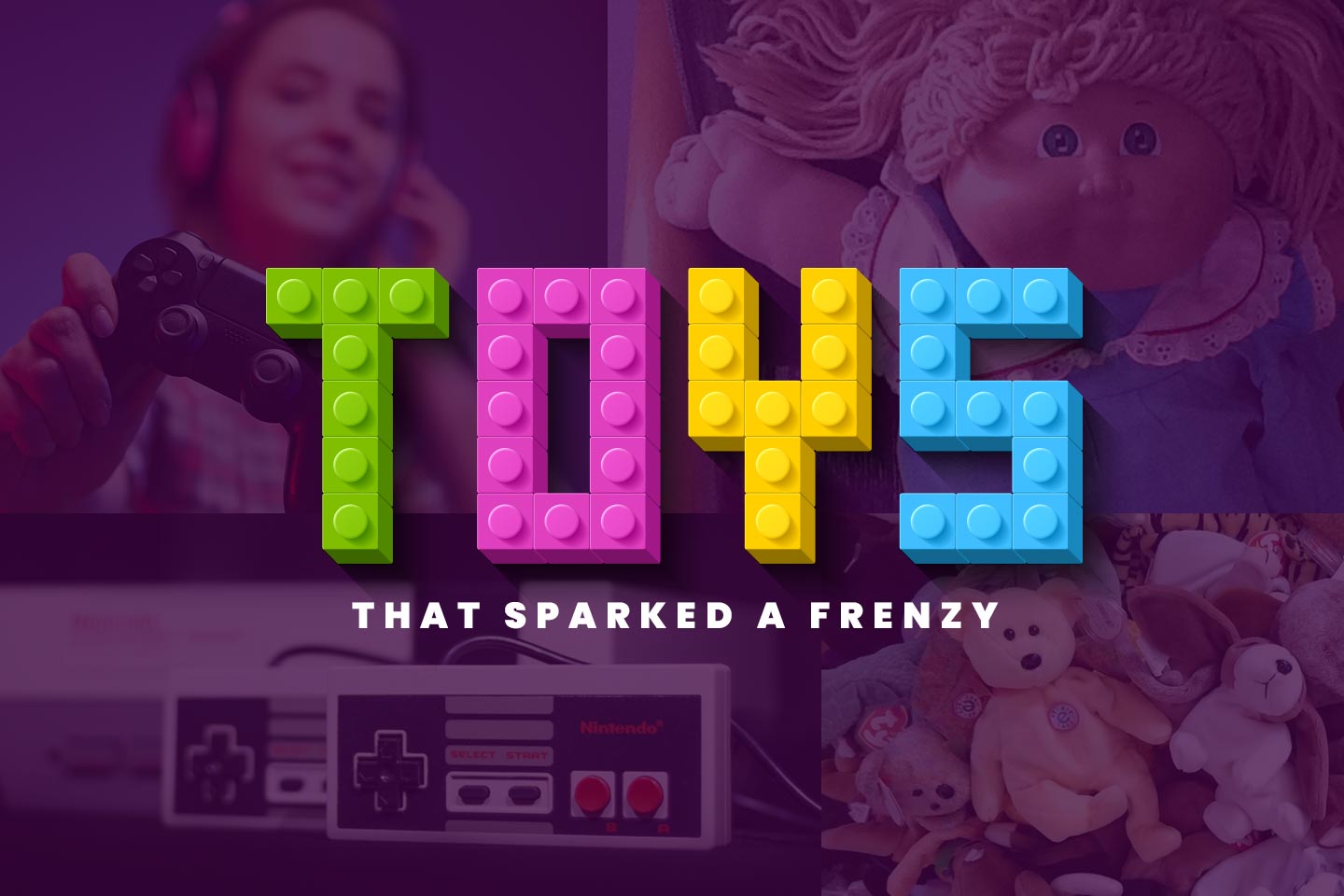 Most Popular Toys that Sparked a Shopping Frenzy

The shopping season has already begun and while this year’s supply chain issues are making it more difficult to find the gift you’re looking for, many will remember that this isn’t an unusual phenomenon. Going as far back as the 80s, products weren’t in stock due to overwhelming popularity created by advertising and word of mouth, forcing people to camp outside of stores for days to have a chance to buy when they became available. Oftentimes consumers would have to travel across the country to find that must have item.

Online shopping may have changed consumer shopping habits which could make products easier to find, but every so often a toy or game will come along that starts an absolute shopping frenzy.

Here are some of the biggest products consumers were absolutely infatuated with from the past four decades.

While there were toy fads through the ‘60’s and ‘70’s, it wasn’t until the Cabbage Patch Kids appeared on store shelves in the early 1980’s that sparked the frenzied shopping we envision today when talking about the holiday shopping season. The demand of the dolls led to physical fights in stores and extreme price gouging with some Cabbage Patch Kids being sold for 10 times their retail price of $25.

In the late 1980’s every kid wanted to have the cutting edge technology that the 8-bit Nintendo Entertainment System (NES) provided. Nintendo couldn’t keep up with the demand of its most wanted games at the time, The Legend of Zelda II: The Adventure of Link and Super Mario Bros. 2. Few copies of the games were shipped causing hysterics in retail stores.

Just like the NES, Nintendo’s Game Boy became the must-have gift for the holiday shopping season of 1989. The Game Boy was the first mass market portable gaming system released (and second cartridge-based) and demand was high. On the first day it was available, Nintendo sold 40,000 units.

Nearing the 21st century it wasn’t electronics, but a stuffed animal that sparked shopping pandemonium. Beanie Babies were not only seen as toys but as financial investments, selling at almost six times their asking price on a new online retail platform known as eBay. Beanie Babies were known to be discontinued and some of the rarest sold for nearly six figures.

Only second when it comes to holiday toy hype to the Cabbage Patch Kids is Tickle Me Elmo. In 1996, the retail price for a Tickle Me Elmo doll was $27.99. Black market sales of the dolls went upwards up to 600 percent or more than retail. Tickle Me Elmo was in such demand they became popular charity auction or raffle items.

This electronic toy introduced all the responsibility of a real pet with none of the physical clean up. The digital pet would cry if it needed food or attention. During its height of popularity, 15 Tamagotchi units were sold every minute in North America.

When extreme sports entered the mainstream through televised events like the X Games, scooters became the must have toy of the new century. The foldable, easy to carry scooter sold five million units in its first six months of release.

In the early 2000’s Microsoft would reignite the video game craze by releasing the Xbox 360 a year ahead of Sony’s PlayStation. Manufacturers couldn’t keep up with demand and scalpers took advantage by purchasing and then reselling the gaming console for thousands of dollars online.

Even with a $600 price tag, Sony’s PlayStation 3 was hard to find when first released. News stories at the time warned of fights and robbery as people camped out overnight for the must-have consoles.

The hot holiday hype of the 2010’s was Elsa. Learning from past toy sales frenzies, Disney stores across America would restrict the number of Frozen products customers could purchase to avoid possible confrontation in stores. This lead to empty shelves and people turning to less reputable places to find anything Frozen. Elsa costumes at this time could be found online for upwards of $2,100.

Fidget spinners initially got their start in the 1990’s, but it wasn’t until 20 years later that they became a must-have item. Early adopters of the toys were kids and teens who would trade them at school. Toy manufacturers took notice and soon demand was outstripping the supply. Time Magazine wrote an article stating that chartered jets were used to ship spinners to Toys ”R”Us.

As their name implies, Hatchimals were fluffy robot animal combinations that “hatched” from an egg when they were ready to be born. Reminiscent of the prior decade’s Furby, Hatchimals would sing, chirp, and its eyes would change colors. It was the must have toy for every young child selling for nearly five times the retail price on re-seller websites.

Shopping for that must-have gift doesn’t always have to be a harrowing experience, especially when it comes to protecting yourself and your family. Mercury Insurance makes it easy to shop online for insurance and has been ranked best among all insurers in the segment for its overall digital shopping experience, according to the J.D. Power U.S. 2021 Insurance Digital Experience Study.

Let us know how many of these toys you had or remember shopping for. Tag us on Twitter and Facebook and share your holiday gift giving memories.