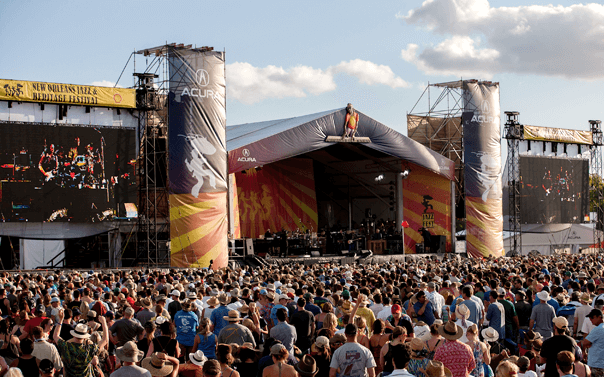 The Heritage of Jazz Fest

Known as one of the longest running major music festivals in the country, the New Orleans Jazz & Heritage Festival, more commonly known as “Jazz Fest,” celebrates the indigenous music, culture and soul of New Orleans. Since its inception in 1970, the music of Jazz Fest has encompassed every style associated with the city and the state including jazz, blues, R&B, gospel, Cajan, Zydeco, Afro-Caribbean, folk, Latin, rock, rap, country, bluegrass and everything in between. Over the years, many local bands and some of the biggest names in music history have graced the stages of Jazz Fest including The EAGLES, Jimmy Buffet, Aretha Franklin, Billy Joel, John Mayer, Bon Jovi, Mumford & Sons, Erykah Badu, Aretha Franklin, Miles Davis, Bob Dylan, Ella Fitzgerald and Dizzy Gillespie.

The soul of Jazz Fest emerged the moment prominent gospel singer Mahalia Jackson showed up unannounced to the Festival. She and Duke Ellington joined the Eureka Brass Band leading a crowd of second-line revelers through the Festival grounds. When producer of the Festival, George Wein, handed Jackson a microphone, she sang along with the band, and the spirit of Jazz Fest was born.

What started as a small festival with no microphones, an audience of 350 people and an admission price of a mere $3, grew into a two-weekend long cultural affair. Hundreds of thousands of people gather at the Fair Grounds Race Course, just ten minutes away from the French Quarters. Inspired by the first event, the Festival continues to celebrate Louisiana culture with the combined fervor of a gospel hymn and the joy of a jazz parade.

While music fans flock to hear internationally renowned artists, they also come to chow down. The Festival has been known to feature the best local cuisine from the region with more than 70 options for foodies at last year’s event. This year local popular treats will be once again available, including Crabmeat Po-boys, crawfish and Cajun jambalaya.

Festival goers also get a chance to experience a cultural immersion from around the world in the marketplaces and villages, where they can purchase handcrafted clothing, leather goods, jewelry, musical instruments and much more from artisans. In the villages, visitors learn the traditions of the Marching Clubs enjoy traditional drumming and dance by the Louisiana’s indigenous people and watch float makers carve intricate Mardi Gras floats.

Now in its 46th year, Jazz Fest carries on The Big Easy’s legacy as the birthplace of Jazz with it its one-of-a-kind festivities, and remains a cultural icon for all attendees to enjoy.