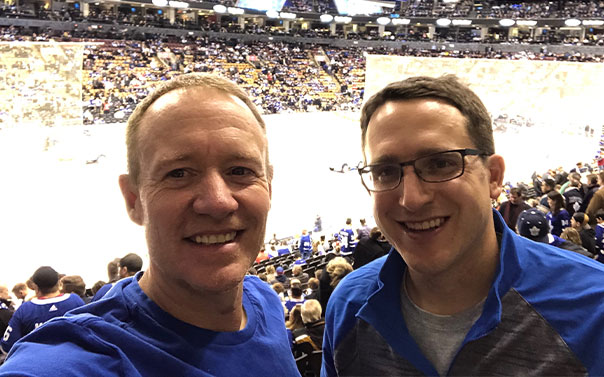 Rob Polender didn’t care much for hockey growing up, so he never had a hometown team he rooted for until moving to Tampa after the Bolts won the Stanley Cup in 2004. However, his fanaticism for the team wasn’t immediate. “It was really when the team was bought by Jeff Vinik [in 2010], climbed to the top of the ESPN Ultimate Team Rankings for Best Fan Experience, and we became contenders again that I really began following the team,” he said. Now an avid fan, he was beyond excited when he found out he had won a sweepstakes for an all-expenses-paid trip to Toronto, Canada for a VIP tour of the Hockey Hall of Fame from Mercury Insurance, a meet and greet with Hall of Famer Dave Adreychuk, plus tickets to a Tampa Bay Lightning vs. Toronto Maple Leafs game.

Rob shares the details of his experience as the 2019 winner of Mercury Insurance’s Hall of Fame with a Hall of Famer Sweepstakes, and what it was like to meet “Uncle Dave.”

MERCURY: Have you been a life-long Tampa Bay Lightning fan?

Rob: The short answer is no, but I’ve followed the team for the past six years.

My wife and I grew up in Wisconsin but, although I remember going to many [Chicago] Cubs and [Minnesota] Vikings games, I don’t recall attending a professional hockey game when I was young. I started getting into hockey while in college in Chicagoland. My roommate freshman year was on the hockey team, so I went to a lot of those games. We also played a lot of EA Sports NHL ’94 on Sega Genesis and, although I had no connection to Tampa at the time, I always played with the new Lightning team.

My wife and I eventually relocated to Tampa. I started attending playoff games during their run in 2015, and the atmosphere that surrounds playoff hockey is what got me hooked. I’ve watched almost every game on TV for the past two seasons, so winning these tickets was a special treat!

MERCURY: Why did you enter the sweepstakes?

Rob: As soon as I saw it advertised on the Lightning’s website, I knew this Hall of Fame trip would be bananas! The contest entry form was short – it took me 30 seconds – and then I forgot about it.

MERCURY: What were your first thoughts when you found out you won the trip, tickets and meet-and-greet experience?

Rob: I was actually a bit stunned when I was notified. Sure, I questioned if I was being scammed, but then I remembered entering the contest, and I also received both an email and voicemail about winning. Then I was buzzing for hours like I’d had too much coffee to drink, because no one expects to win these things! I couldn’t believe I would get to meet “Uncle Dave!”

MERCURY: Who did you bring with you on your trip?

Rob: My brother-in-law came to Tampa for a spring break visit with his kids and the prize overlapped with his trip. He was more than willing to be my guest at the Hockey Hall of Fame.

MERCURY: What were you most looking forward to about the trip?

Rob: We were really looking forward to the tour with Dave Andreychuk, but attending a game in Toronto was also awesome – those tickets are expensive! My Toronto relatives are more likely to catch a game in Buffalo or even Pittsburgh because of it. We expected to have plenty of time to kill before and after the tour, but we ended up running into Dave in the hotel lobby and he asked us if we wanted to go to their morning skate – umm, YES! So we toured around the Scotiabank Arena and ran into former Toronto Maple Leaf Darcy Tucker. We entered the arena at ice level and ended up sitting down with the media staff and Lightning commentators as we watched the practice.

MERCURY: What was your favorite experience at the Hockey Hall of Fame?

Rob: At the Hall, it was amazing to hear Dave talk about the memorabilia from his 23 year-career that is scattered through the display cases, like the jersey he wore in the 2004 Stanley Cup final or the pads he wore for years and years that were patched repeatedly until they became useless. He was also great with any fan who approached us! And then, also not on the itinerary, we were joined by Dave’s parents before the game, who gave us another perspective about his career.

Rob: My favorite memory is attending the first round against the Detroit Red Wings in 2016. The series was such physical, contentious playoff hockey. During that series, Brian Boyle did the chicken dance when Justin Abdelkader refused to fight him. These days I take special joy in watching the Bolts play the Red Wings, as we’ve beat them 15 times in a row.

Of course, seeing the Lightning win 6-2 against the Maple Leafs during my trip to Toronto was icing on the cake.