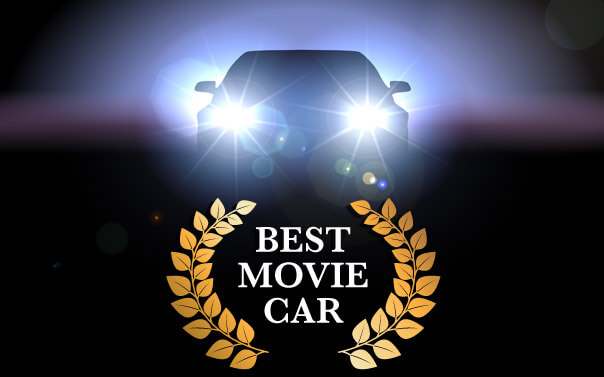 Every February, the Academy of Motion Picture Arts and Sciences recognizes the movie industry’s most notable films, actors, music and more. We think there should be a category for the best car featured in a film.

In honor of the Oscars, we would like to give our nominations for the 10 best movie cars of all time.

Once in a while, a big screen debut and a vehicle debut overlap—in this case it was Transformers and the newly redesigned Chevy Camaro named Bumble Bee. While the Autobots could reconfigure themselves, the production Camaro could be ordered from the factory with style reflecting its silver-screen sibling.

The 1968 crime thriller Bullitt includes one of the greatest car chase scenes in movie history. Featuring a pair of classic American muscle cars, a 1968 Dodge Charger and a 1968 Ford Mustang, the drivers play a dangerous game of cat and mouse on the streets of San Francisco. And it also led to Ford to create several Bullitt-style Mustangs to pay homage to the film decades later.

The 2001 summer blockbuster The Fast and the Furious revealed the underground world of illegal street racing to millions of movie goers. Featuring a variety of highly modified Japanese sports cars, the movie’s two heavy-hitters, a metallic orange Toyota Supra and a black 1969 Dodge Charger driven by the film’s Dominic Toretto. The only thing hotter than the lead car in this movie was the nitrous-fueled race scenes.

In 1983, National Lampoon’s Vacation knocked the socks-off vacations with the Griswold family driving cross-country to “America’s Favorite Family Fun Park” – Wally World. Along the way, the family deals with mishaps ranging from problems with vandals to vehicle repairs. One constant throughout the movie, however, was the Family Truckster, a pea green station wagon with faux wood paneling.

The ‘80s saw some great cars come and go, but none as memorable as the 1981 DeLorean DMC-12 built by wonky scientist Doc Brown to travel through time in Back to the Future.

Douglass, a race car driver, goes into a luxury car dealership and is followed home by a 1963 VW Bug that seems to have a mind of its own. Tennessee, his sometimes drunk mechanic, names the car “Herbie” after the love bug goes on a winning streak at the race track—winning over the hearts of American movie fans in the process.

Ka-Chow! Lightning McQueen was the hotshot racecar in the 2006 Disney Pixar animated film Cars. Lightning’s cocky racing style let to a lot of wins, but when he gets waylaid in Radiator Springs, he finds the true meaning of friendship and family. This animated film is already a classic enjoyed by viewers of all ages and has undoubtedly ignited a passion for cars in many youngsters.

Bueller … Bueller ... Bueller ... Sometimes a high-schooler needs a day off, and in this case it was Matthew Broderick who convinces his friend to let him drive a Ferrari 250 GT California, an extremely rare vintage car that ends up going through the garage in one of the most comical car accidents in movie history. Car and movie buffs may be quick to mention that only 37 were made, and one recently crossed the auction block at the Baillon Collection for a cool $28.5 million.

The 1977 film Smokey and the Bandit catapulted the Pontiac Trans Am to the head of the class in the late ‘70s. It became as big a star as the movie’s larger than life lead actor, Burt Reynolds, and an entire generation of fans still dream about owning this beast. But you just missed your chance, because it just sold at auction for $450,000.

Car enthusiasts could fill this entire list with James Bond’s cars. The top of the list, though, has to be this 1964 classic from Goldfinger. This beauty set the tone for all future Bond cars and it’s definitely the sexiest spy car of all time. In our minds, Aston Martin will forever be synonymous with 007.