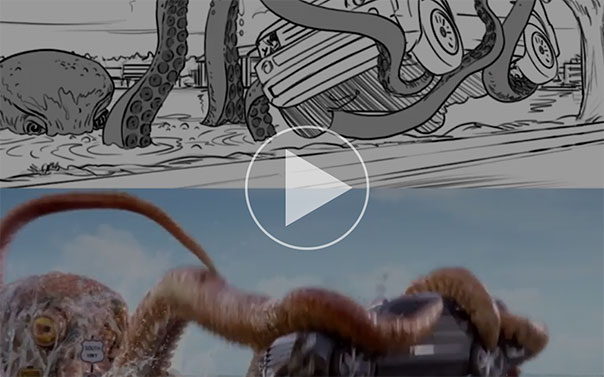 Behind the Scenes: How A Kraken is Brought to Life

Competing for consumer's attention in the auto insurance advertising space means going big, and in Mercury’s case, they went Kraken big! Starring in Mercury’s newest commercial is an eight-tentacle, yellow-eyed Octopus with 960 suction cups and an appetite for SUVs. Mercury enlisted the help of John Myers and his team of visual effects specialists at Ring of Fire to bring the monster to life. You might recognize the visual effects shop’s work on the silver screen: Spider-Man 2, Bucket List and Drive; television series: It’s Always Sunny in Philadelphia, Six Feet Under and Mozart in the Jungle.

Visual Effects Supervisor John Myers recently sat down with us to share how his team created the Kraken for the next chapter in the adventures of Mercury’s Super Agents. He knew it would be challenging for his visual effects team to conceptualize the movement and look of the Kraken along with matching the fluid dynamics and splashing caused by the sea monster, but they were up for the task. After nearly one year, the Kraken was born. Here’s some behind-the-scenes footage, as well as additional commentary from Myers about the inspiration behind the creation.

1. What inspiration did you use to create the sea monster in the commercial?

We pulled inspiration from lots of places, from the classic Jules Verne, to illustrations and sketches of Krakens spanning many hundreds of years, to modern day feature films. One of the best resources was to study the motion of actual octopi and squid on YouTube.

The Mercury Insurance Kraken looks a lot like the “Giant Pacific Octopus,” which grows bigger and lives longer than any other octopus species on the planet. It’s skin color is what we used for our beast.

2. What issues did you run into in trying to give the Kraken a real-life aspect?

3. What do you think Jules Verne, author of “20,000 Leagues Under the Sea,” would say about your Kraken?

Oh man! I hope he would get a huge kick out of it and smile, maybe laugh a little.

4. What inspired you to enter the VFX field?

The original 1977 Star Wars film, Dune, Blade Runner and Raiders of the Lost Ark got me hooked on how powerful visual effects can be and I want to create that same experience for viewers.