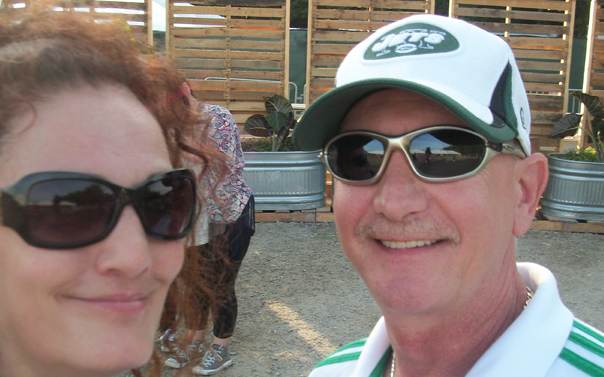 Dana Pugsley was the final winner of Mercury’s Festival VIP Sweepstakes. She and her husband Andy, childhood sweethearts from New York and currently residing in Alabama, traveled to Dover, Del. for a long overdue honeymoon. Dover may not represent romance, but it is home to the Firefly Music Festival, which was held June 18-21, 2015. With its enviable lineup, numerous stages and unique downtime activities, music lovers Dana and Andy wouldn’t have spent their honeymoon any other way.

Q: What was the first thing you did once you landed in Dover and traveled to your hotel?

We were so tired from our trip, we just wanted to lie down. No chance! We met with the AXS crew and filmed our arrival. They then took us out to eat at a great Mexican Restaurant, La Tolteca, where we enjoyed dinner. As a matter of fact, Andy has never eaten Mexican food so it was a first for him!

Q: How'd you spend your downtime (both at the festival and afterwards)?

Our hotel had a swimming pool and hot tub, so we took advantage of that. And each day, after all the walking at the festival, believe me, we looked forward to that hot tub! We also went to "the Monster" (Dover International Speedway) and Dover Downs. There were no car races, but it was great to see the NASCAR track. We went on a tour of Dover Downs, and a person there let us into the private booth to look at the track. That was really cool! And, of course, while there, Andy played some Black Jack and I played a few different slot machines. We both came out winners! From there, we walked to the festival. In between acts at the festival, we enjoyed the Beercade and played LOTS of pinball and even some air hockey. It was great that the games were all free, and the tent was air conditioned, a nice break from the heat and the walking! 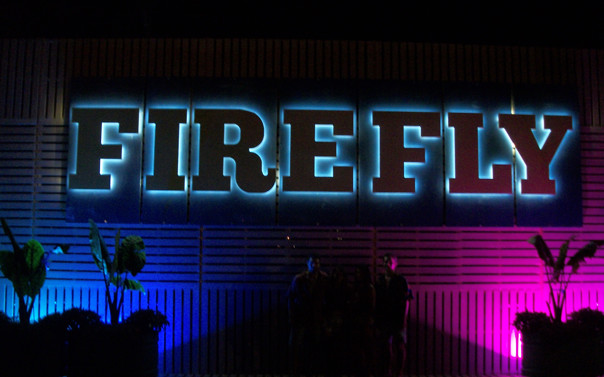 Q: How did the VIP experience differ from the regular festival experience?

The VIP experience was awesome! We were able to get SO close to the stages, as well as take advantage of the private bathrooms, free non-alcoholic beverages, and meet some great people. The VIP access was not nearly as crowded as the general admission areas, so it was nice to walk around, find places to sit, eat, and enjoy the shows.

Q: Who was your favorite act to see at the festival?

Sir Paul McCartney was by far the best! He had just celebrated his 73rd birthday the day before and let me tell you ... he was incredible! That man can still rock out with the best of them! I LOVED his rendition of Foxy Lady and his tribute to Jimi Hendrix. He was just breath-taking, magnificent, and mind-blowing! It was just so wonderful to hear old Beatles tunes, as well as some from Wings, and his solo career. He is now marked off my "bucket list" (although I wouldn't say "no" to seeing him again)!

Q: Did you discover any musical acts with which you were unfamiliar prior to the festival?

I had never heard of Matt and Kim and they were great, as were Allison Wonderland and the Kooks! There were many  bands we would stop and listen to as we wandered the festival grounds, but unfortunately, for many of those, I did not get close enough to the stages to see their names! I had left the schedule at the hotel and not owning a smartphone means I couldn’t download the Firefly App.

Q: Festivalgoers had to evacuate Firefly on Saturday night due to pending thunderstorms. Were you at the festival at this time?

We were at the concert, and it was about 15 minutes before the Kings of Leon were to perform, when we got notice to evacuate! We were on foot, and walked back to the hotel with what appeared to be thousands who were also leaving the festival. It was a bit scary during the lightning, but we made it back to our hotel before the rain came.

Q: What was it like to see the production end of putting on a festival? What did you like most about being behind the scenes?

It is just amazing to see how many people are involved in making sure viewers get the festival experience on TV. Events team, press, marketing, engineers, station sound, etc. So many people with specific jobs that work well together in ensuring we see a great concert. AXS TV has an audience that is incredibly passionate about music and culture in general, so the production company has to include a large variety of musical genres to please its viewers. It all looks so easy from our side of the camera. I do not envy them their job, but I do appreciate all their hard work!

Q: This was an opportunity to have the honeymoon you never had. What did you like most and what, if anything, would you change/improve upon?

The festival was awesome, and since Andy and I both have a deep love of music, this was the PERFECT honeymoon for us. I only regret not being able to spend time in Philadelphia sight-seeing, but then again, we would have missed parts of the festival. And that was not something we were willing to skip out on!

Q: Would you recommend this festival to others?

Absolutely!  There was rock, hip-hop, indie music, country, etc. There were acts for everyone spread out across almost 100 acres, with several stages, as well as so many other areas to enjoy! The scheduling is great, but I suggest you have a smartphone and download the Firefly App.  The Hammock Hangout was great to relax, while the Thicket was just mind-blowing. There, everyone was wearing headphones and dancing, but if you took the headphones off, there was complete silence! How cool is that? The Beercade was a lot of fun. Air-conditioned, with a large bar, places to sit and hangout, as well as many arcade games and table games ... all free to play! The only con that I encountered was the tremendous amount of walking. I recommend comfy shoes, and galoshes for the muddy days, and just make sure you rest a lot and keep hydrated. Other than that, it was an experience I am SO glad I got to share with my husband!

Q: Anything else you want to add?

It was a lot of fun to see Snoop Dogg in concert! He put on a great show. However, the man who climbed the speaker tower, and put on a dance for about 10 minutes before being escorted down, really stole the show. P.S. I do not recommend that anyone do this, it is very dangerous!

What was also awesome was that our hotel room faced the back end of the festival and we watched people setting up tents all Wednesday evening. When we woke up, there were tents as far as the eye could see! And, it wasn’t until we walked to the festival that we realized that was just a small part of the campers. It seemed there were campers, tents, and RVs everywhere! We also met some people in the VIP section who had purchased the "glamping package" and they told us how wonderful it was. Although I loved my hotel room with all its amenities, I think that if I ever go to the Firefly Festival again, I would definitely get the "Glamping Package," as well as the Super VIP pass (which, in addition to the VIP passes also gets you even closer to the stage as well as the backstage areas). Now, THAT'S the way to enjoy a festival!

I cannot thank Mercury Insurance and AXS TV enough for such an amazing and wonderful trip.