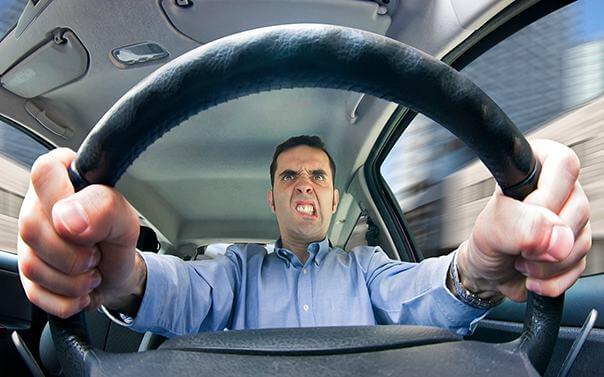 September is National Courtesy Month, so we’d like to take a minute to encourage you to treat everyone with respect. This includes the time we spend behind the wheel.

Why can’t we all just get along?

Many of us have had to deal with aggressively impolite drivers – people who tailgate, cut you off, lay on their horns and make inappropriate hand gestures as they speed past you in an expression of displeasure for whatever inconvenience they perceive that you’ve caused them.

“Displays of aggression on the road are becoming an all-too-common occurrence,” says Kevin Quinn, vice president of claims and customer experience at Mercury Insurance. “People who engage in these driving behaviors aren’t focused on the wellbeing of others – they don’t stop to think about how dangerous their actions are and that they’re putting themselves and those around them in danger.”

More people on the roads = aggression

So what exactly is “aggressive” driving?

Two or more of these actions coupled together are considered a display of aggressive driving.

According to a 2017 report issued by NHTSA, aggressive driving continues to play a substantial role in traffic accidents. In fact, 67 percent of people surveyed in another NHTSA study on dangerous driving felt that their safety was threatened by other drivers.

While aggressive driving is a traffic offense, road rage – which NHTSA defines as the assault of a fellow motorist or their passengers with a vehicle or weapon – is a criminal offense. Fifteen states have passed laws to discourage aggressive driving and road rage:  Arizona, California, Delaware, Florida, Georgia, Indiana, Maryland, Nevada, New Jersey, North Carolina, Pennsylvania, Rhode Island, Utah, Vermont and Virginia.

Seven of these states have specific provisions regarding harassment, intimidation, the creation of hazards, general lack of concern for the safety of others and the intent to injure other motorists. One state – Indiana – includes a clause about the unnecessary or excessive use of horns.

“Unfortunately, we can’t control the actions and reactions of other drivers,” Quinn said. “But, what we can do is meet road rage with anti-rage. Keeping your cool and ignoring the rude behaviors of others can help curb road rage and reduce risk, diffusing otherwise volatile traffic situations.”

The golden rule of driving

The NCHRP report mentions that frustration contributes to aggressive driving behavior. Drivers who experience frustration are more likely to project elevated levels of aggression triggered by contextual factors, such as the driver’s psychological disposition and traveling environment.

Practicing common courtesy on the road can go a long way. Instead of feeding into the rage of others, try implementing the golden rule: treat other drivers the way you would like to be treated. Resist the urge to honk your horn or brake check tailgaters, obey traffic laws and remain courteous when faced with angry motorists.

“National Courtesy Month is a great way to encourage people to think of others as they go about their daily lives,” Quinn said. “If you drive, you will encounter traffic and bad drivers, but rather than letting it get to you, try taking a deep breath and thinking about getting home safely to your family. It tends to put things in perspective.”

Put your best foot forward and practice some of these anti-rage techniques when on the road:

These tactics can help you avoid collisions while you’re on the road, but there are times when accidents are simply out of your control. Even courteous drivers can find themselves dealing with a fender bender on the roadside. Familiarize yourself with your insurance company’s claims process, so you’re prepared and know what to do in the event of an accident.