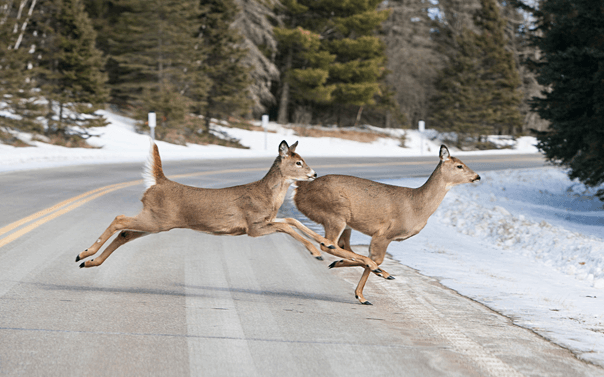 OH…DEER! Watch for deer this time of year.

Hundreds of thousands of deer-car collisions occur every year throughout the United States, with the majority of these accidents happening in October and November. Nationally, deer-car accidents cause more than $1 billion in vehicle damages and claim 150 lives every year, and the number of fatalities has been rising since 2000.

"In the fall, deer go into what is known as "the rut" (mating season), when deer increase their activity, expand the area they cover and increase the number of roadways they'll cross," says Ron Garner, retired Department of Fish & Wildlife biologist. "With more deer on the move your chances of encountering them rises substantially."

"It only takes an instant for an animal to bolt from the brush in front of an inattentive driver, and that could lead to disastrous consequences," says Stephanie Behnke, Mercury Insurance claims innovation director. "Collisions with full grown deer can total your vehicle and we’re seeing these kinds of claims more and more, so we want to remind everyone to stay sharp behind the wheel. Let’s work together to make roads and highways safer for everyone"

Stay safe and alert on the road, and avoid deer accidents with these tips:

If you do collide with a deer, remain calm. Try to move your vehicle to the side of the road, turn on your hazard lights and call the police. Additionally, do not attempt to remove the deer from the road unless you are certain it is dead; deer can be very dangerous when injured. Stay clear until help arrives.