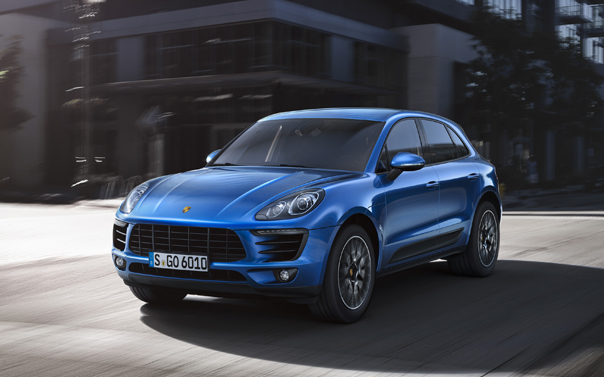 The all-new 2015 Porsche Macan will go on sale this year in the very competitive compact luxury SUV segment and is definitely worth a look.

The Macan joins the larger Cayenne in Porsche’s lineup and is considered a sportier alternative to its competition. Base Macan S models start at $50,895, which is $300 more than the larger, less-powerful Cayenne V-6. That’s because the true entry-level Macan with a turbocharged four-cylinder engine isn’t sold in the U.S., at least not yet.

Instead, the Macan S comes with a 340 horsepower, turbocharged V-6 that’s basically an all-weather sports car for active lifestyle consumers.

Like every other Porsche, the options sheet is a mile long and can easily drive a fully loaded model north of $100,000. The Macan Turbo engine option is by far the most expensive, moving the cost of entry to just over $73,000. It ups the ante with a 400-horsepower engine that routs power to all four wheels via a seven-speed automatic transmission. Plenty of braking and suspension upgrades also help justify the cost.

“There’s a thrill to owning fast and exotic vehicles,” said Jeff Schroeder, Mercury Insurance senior product manager. “Before shopping for a sporty vehicle, however, I would recommend speaking with a local Mercury Insurance agent to understand how auto insurance costs can vary when selecting a base model versus a sports model.”

Then again, there’s a lot to be said for a luxury SUV that can hit 60 mph in 4.4 seconds and a top speed of 164 mph. Sports car owners will definitely give you a second look in the Macan Turbo.

Jacob Brown covers the automotive industry and has written for Motor Trend, Automotive.com and Automobile Magazine. When asked about how many cars he’s driven, he said that he lost count somewhere in the hundreds.