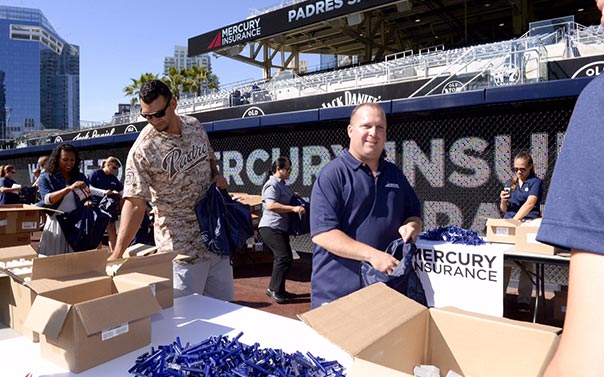 America’s favorite pastime is back in full swing and for the second year in a row, the San Diego Padres partnered with Mercury Insurance to host a packing party where 1,000 baseball-themed care packages were assembled for U.S. Marines and Sailors of I Marine Expeditionary Force, Camp Pendleton California, while they’re deployed overseas.

“The Padres are proud to partner with Mercury for the second straight year to assemble care packages for the brave men and women currently serving our country,” said Tom Seidler of the Padres ownership group. “Reinforcing and growing the club’s longstanding commitment to supporting our military and first responders and their families is a high priority for our ownership group, and we commend partners like Mercury that share that commitment.”

The annual Mercury employee-led packing party started in 2008 by Monica Nungaray and Melyssa Jones. They were inspired by Nungaray’s eldest son who was serving in the Marines and stationed in Iraq at the time. He told his mom that many Marines and Sailors never receive a piece of mail, let alone a care package. Seven years later it’s become a larger company initiative that has reached major-league proportions.

“The Mercury Insurance packing party hits really close to home for a lot of employees,” says Kevin Kellum, a Mercury employee, Army veteran and currently a captain in the Army Reserves. “These Marines and Sailors are people’s sons and daughters who are protecting our freedom. Each time I received a package while serving overseas, it really made my day. It’s great to be on the other end of it, and showing the men and women who serve our country we care about them.”

In addition to Kellum’s connection to the military, Mercury founder George Joseph, is a World War II veteran who flew 50 missions over North Africa and Italy. Each package was accompanied by a letter from Mr. Joseph.

“I’m proud that Mercury Insurance is working with the San Diego Padres to send a little ‘touch of home’ to Marines and Sailors,” said Mr. Joseph. “I hope these packages find them well, and that they come home safely.”