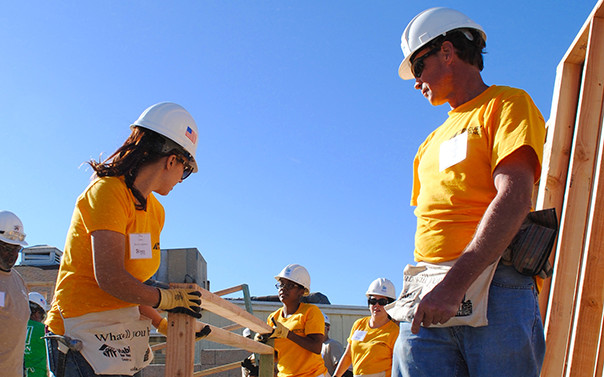 Resolve to Change Someone's Life for the Better

The New Year is a time for change. Many of us resolve to lose weight or reduce debt or quit smoking, but so often we abandon these resolutions before February even begins. When we’re only accountable to ourselves it’s easy to quit so, as an alternative to looking inward, perhaps we should look outward to help someone else instead.

Mercury is deeply committed to playing an active and supportive role in our local communities. We send care packages to American servicemen and women stationed abroad to show our appreciation; support pediatric cancer research (link opens in new tab); and offer tips for people to learn how to protect their families, pets and property.

Mercury is also a strong supporter of Habitat for Humanity. Throughout 2015, Mercury made significant financial donations and employee volunteers in Southern California, Texas and Oklahoma contributed their time and effort to the organization.

In January and April, employees from Mercury’s Brea office participated in builds for a housing development in La Habra, which is part of Habitat for Humanity of Orange County. Several of the build participants were eager to share their thoughts and feelings about how spending a Saturday getting their hands dirty for a great cause made a lasting impression on them:

“It was a very rewarding experience working with fellow employees in this type of environment. Pooling our individual skills and working as a team alongside a future homeowner was extremely uplifting. Mercury has teamed with a wonderful organization and I’m proud to have had the opportunity to participate in such an event.” - Susannah Trejo

“Habitat for Humanity provided a ‘behind the scenes’ picture of what it involves to build living quarters for people who may be living on the street. We are so privileged to have more than the necessities and most of us take that for granted. Not anymore!” - Nancy Ekelund

“I enjoyed volunteering for Habitat for Humanity. You don’t realize the many countless hours involved in building a home. It was a very rewarding and eye-opening experience for me and I would definitely volunteer AGAIN!!!” - Shirley Lee

“I had a great time! In my small way, I helped build a home. Someday that home will have a family in it to celebrate the holidays and build memories. Thank you Mercury for letting me be a part of this project.” - Stephanie Brown

“I took with me the knowledge that in a small way I was able to help with the building of a home. When my schedule allows, I will assist at another build site during the week, not just on a Saturday.” - Alan Wiles

The funds and volunteer hours Mercury contributed to Habitat for Humanity of Orange County helped the organization reach the amazing achievement of building its 200th home. The dedication ceremony for the La Habra development was held on November 7 and Randy Petro, Mercury’s chief claims officer, presented the Martinez family – a mother and daughter and first time homeowners – with the keys to their new home.

Southern California employees also participated in a Veteran’s Day build in Inglewood. Twelve volunteers worked alongside fellow community members to break ground and erect the first wall on the first of three homes that are being constructed for families of veterans.

Employees in Mercury’s Austin office were also excited to partner with Habitat for Humanity and didn’t let a little October rain get in their way. While it was too wet to be outside, volunteers worked diligently at Habitat for Humanity’s ReStore – a nonprofit home improvement store and donation center – labeling merchandise to help prepare for the store’s grand opening.

“Although I was disappointed that the weather didn't cooperate so that I could actually work on a build site, I was glad to be able to assist the Habitat for Humanity organization by helping to price items in their brand new store. It was nice to meet with one of the homeowners as well, because he was clearly so grateful for the assistance that he has received from this organization to help his dreams of being a homeowner come true. This is a great organization for Mercury to support, and I look forward to a chance to work on a build site in the spring. Thank you!” - Diane Myers

In Oklahoma, Mercury employees worked with the Central Oklahoma Habitat for Humanity on a Critical Home Build to help renovate a home that was devastated by May floods. The home belongs to Donnie Campbell, a disabled, retired U.S. Army veteran who was very appreciative of Habitat for Humanity and the volunteers. The dedication ceremony was held on December 22, where Judy Garrison, Mercury’s manager of application support, offered remarks and accepted a plaque on Mercury’s behalf.

As the familiar saying goes, “To the world you may be one person, but to one person you may be the world.” We look forward to a New Year filled with looking outward and hope you do, too.