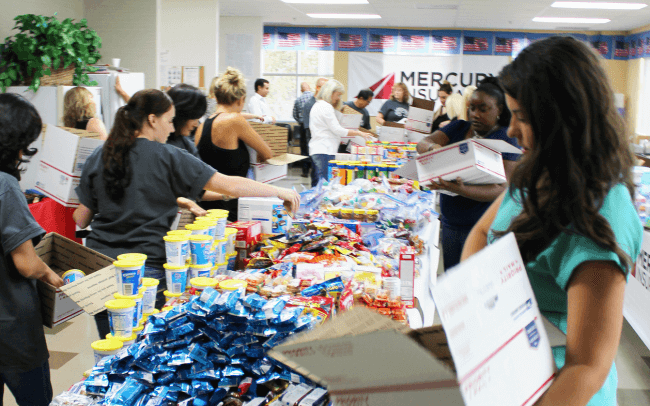 The events that transpired on September 11, 2001 will forever be etched into the memories of every American.

Seven years ago, Mercury Insurance employees Melyssa Jones and Monica Nungaray co-founded a “Packing Party” event with the intention of sending care packages to members of the military serving overseas as a thank you. Nungaray’s eldest son served with the Marine Corps in Afghanistan and Iraq and reported to his mom that many Marines never even received a piece of mail, let alone a package.

“Often, it’s the little things that people miss most when they’re away from home for extended periods of time,” said Liz Romero, senior human capital business partner for the Valencia office whose god son is a Marine. “This is especially true for active duty U.S. military personnel stationed far away from everything familiar.”

This year, the annual employee-driven initiative held at the Camarillo office was expanded to Mercury’s nearby Valencia office.

“Adding the second Mercury office to the Packing Party program gave us the opportunity to send even more care packages,” said Stephanie Behnke, Mercury claims innovation director and a U.S. Army veteran. “And we hope to expand it even further next year.”

The combined efforts of the Camarillo and Valencia offices produced nearly 200 packages postmarked for delivery on September 11, and were sent to troops based in Afghanistan, Iraq and Jordan. The care packages were filled with items requested by the troops, including playing cards, holiday decorations, beef jerky, candy and trail mix and toiletries like toothpaste, razors, lotion and deodorant.

“The men and women who are stationed overseas spend an extended period of time away from their family and friends,” Behnke said. “These packages tell those defending our country that they’re in our thoughts. It’s our way of delivering a little piece of home to the troops and showing appreciation for their service.”