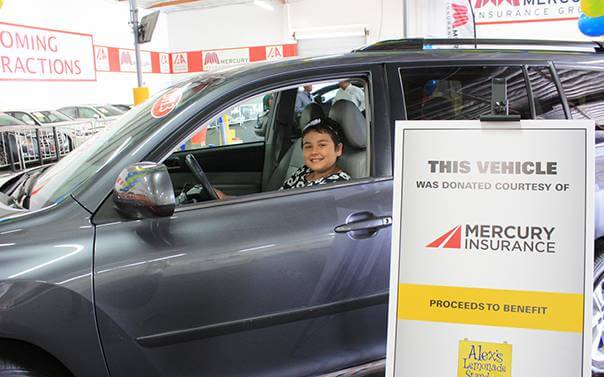 Lemonade! Get a cup of ice cold lemonade for $0.25! You guessed it, we’re talking about a lemonade stand. As kids, many of us experienced the joy of planning and running our own lemonade stand on our neighborhood street corner. This lemonade stand is a little different, however, as Mercury Insurance has partnered once again with one of its favorite foundations, Alex’s Lemonade Stand, to help raise money for pediatric cancer research.

Alex’s Lemonade Stand Foundation (ALSF) was founded by four-year-old Alexandra “Alex” Scott, but her plans for the money she raised were very different than those of countless other lemonade stands run by children along roadsides and in front yards across the country.

Instead of using the profits to buy a toy or to fill up her piggy bank, Alex raised money for childhood cancer research with the hopes of helping children, like herself, who had been diagnosed with cancer. Fifteen years later, ALSF has grown into a national charity committed to finding a cure for all forms of pediatric cancer.

Cancer impacts the lives of hundreds of thousands of kids each year, yet less than five percent of federal cancer research funds are allocated to pediatric cancer research. To date, ALSF has funded more than 500 childhood cancer research projects through lemonade stand sales, corporate partners, fundraisers and car donations.

Mercury Insurance has donated vehicles to benefit ALSF’s cause four years in a row. This year, a 2013 Toyota Highlander was auctioned at Insurance Auto Auctions (IAA) in Anaheim on July 13, selling for $14,700.

“It’s fantastic that organizations like Alex’s Lemonade Stand Foundation and Mercury Insurance are helping in the fight against childhood cancer,” said Joann Sawyer, mother of ALSF hero Karah Casas, who was diagnosed with leukemia in grade school. “Every dollar raised makes a difference and brings us one step closer to finding a cure.”

ALSF hero families have brave children who have been diagnosed with cancer and are currently battling the disease or beaten it into remission. Donations like the Highlander help provide much needed support to childhood cancer research projects and give hope to children like Karah, who dream of a cure.

“Mercury exists to help people put their lives back together – to extend a hand when people need it most. Partnering with Alex’s Lemonade Stand Foundation, an organization that does the same for the families impacted by childhood cancer, is a natural fit,” said Randy Petro, vice president and chief claims officer at Mercury Insurance. “We’re proud to back an organization dedicated to fighting a disease that affects so many lives.”

Mercury has teamed up with ALSF since 2012, donating a vehicle each year, and to date has raised more than $50,000 for childhood cancer research.