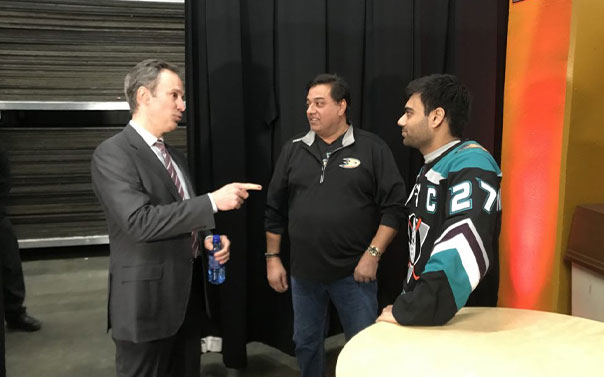 Sunil Brahmbhatt has essentially been a hockey fan since birth – it’s almost a requirement of growing up in Canada. A native of Burnaby, British Columbia – a suburb of Vancouver – he relocated to California in 1985 and was a Canucks fan until 1993, the year the NHL expanded and the Ducks franchise was born. Sunil became an original Ducks season ticketholder and quickly adopted them as his No. 1 team, so he was excited to win a trip for two for an all-expenses-paid trip to Toronto, Canada, VIP trip to tour the Hockey Hall of Fame and premium seats to watch the Anaheim Ducks take on the Toronto Maple Leafs. The prize package also included a meet and greet with Hall of Famer and four-time Stanley Cup winner Scott Niedermayer on the night the Ducks retired his jersey.

Sunil shares more about his ultimate VIP experience as the winning Ducks fan of the Hall of Fame with a Hall of Famer sweepstakes, courtesy of Mercury Insurance.

MERCURY: Why’d you choose to enter the sweepstakes?

Sunil: My wife, Rashila, was actually the one who entered – she always texts and enters sweepstakes. We’ve been Ducks season ticketholders for 25 years and she saw the announcement on the Jumbo Tron at a game.

MERCURY: What were your first thoughts when you found out you won the trip, tickets and meet-and-greet experience?

Sunil: We thought it was a hoax at first! We couldn’t believe it. Mercury left a voicemail on Rashila’s phone, and we called the number back and then received email confirmations, so we knew at that point it must be real. We were ecstatic!

MERCURY: Who did you bring with you on the trip?

Sunil: I brought my 27-year-old son, Keven. Rashila’s a huge hockey fan, but my son and I actually both play hockey, so when she found out she won the contest, she gave the trip to us as a Christmas present because she knew this would be a once-in-a-lifetime experience for us.

MERCURY: What were you most looking forward to about the trip?

Sunil: I was most looking forward to going to Toronto to see a game at Scotiabank Arena, as well as experiencing the trip with my son.

MERCURY: What was your favorite experience at the Hockey Hall of Fame?

Sunil: I had already been to the Hockey Hall of Fame before, but Keven hadn’t. We toured the Esso Great Hall to see the memorabilia and trophies, and that was really a wonderful experience. My son was really excited and, as a hockey buff, he enjoyed the exhibits and history of the game as depicted in the Hall of Fame. It was a great experience getting to see this through his eyes as he took it all in for the first time.

MERCURY: Did you get to meet any Ducks while you were in Toronto?

Sunil: We did run into then coach Randy Carlyle. We stayed at the Ritz-Carlton and he sat two seats over from us at the bar, and noticed I was wearing my Ducks sweater. He ended up talking with us for almost three hours and even inviting us to the morning skate! We chatted with him again the next morning in the stands at the warmup. He was so nice, even though he was under so much pressure with the upcoming game against the Maple Leafs. After the morning skate, Keven and I toured the historic Maple Leaf Gardens and sat in the press gondola to experience how they used to broadcast hockey games, which was really a once-in-a-lifetime experience. Although we didn’t win the game that night, it was still an awesome time.

MERCURY: You extended your trip to see the Ducks play the Montreal Canadiens. What was that like?

Sunil: We flew into Montreal and had an amazing experience being at a Montreal Canadiens home game. Flying out the next day we almost got caught in a snowstorm – something I hadn’t experienced since I moved away from Canada! I was glad to get back to SoCal, but it was nice to spend some more time in Canada.

MERCURY: You got to meet Scott Niedermayer on the night the Ducks retired his jersey. How was that experience?

Sunil: It was AMAZING – he’s a down-to-earth guy! Scott spent 15 minutes talking with us about hockey and what it was like growing up in British Columbia since he and I have that in common. He took time out of one of the most important days of his life just to talk to us and actually had to be pulled away – he wanted to stay and chat more!

MERCURY: You have been a Ducks’ season ticketholder since the team began play back in 1993. What’s your favorite Ducks’ memory?

Sunil:  Honestly, the best Ducks memory I have was watching the 2007 Stanley Cup game five at home, when the Ducks won the Stanley Cup! I’m waiting for Cup No. 2.