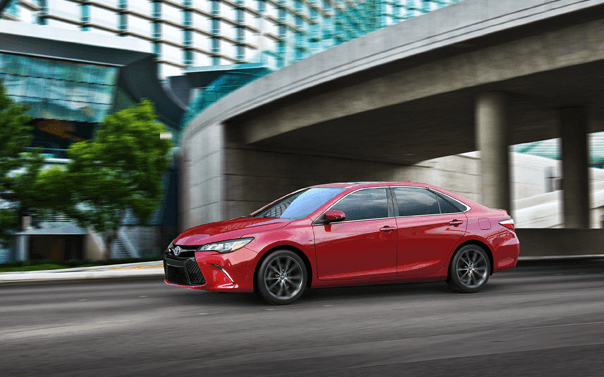 Toyota Spruces Up the 2015 Camry

The Toyota Camry has been among the best-selling cars in the U.S. for more than two decades, providing stalwart reliability and a practical, spacious interior at a reasonable price.

According to many automotive critics, one thing the Toyota Camry hasn’t always been, however, is stylish, at least until the recent debut of the 2015 Camry at the 2014 New York Auto Show.

The 2015 Toyota Camry has been given an attractive, if not aggressive, appearance. It mimics some of the touches introduced on the 2014 Toyota Corolla and 2013 Toyota Avalon, such as the gaping front air intake in the bumper and LED projector headlights. The rear-end gets tail lights that look similar to those on the Lexus ES luxury sedan.

Inside, there are upgraded materials, a new color display in the gauges and even an available wireless charging station for smartphones in the center console.

Despite all of the changes on the outside, the 2015 Camry’s frame remains nearly the same as the ’14 model. That’s a good thing.

“Shopping for a new car is an exciting experience,” says Mercury’s Product Manager Jeff Schroeder. “Going with a larger vehicle like an SUV or something with a V-6 or V-8 engine when more efficient options are available can often seem appealing but can drive up the cost of insurance. It’s best to check with a Mercury Insurance agent to see how your shortlist of potential next vehicles might impact your insurance rates before making a purchase.”

The 2015 Camry carries the same engine and transmission options from last year’s model, which include a standard 2.5-liter four-cylinder engine that achieves 178 horsepower and the 3.5-liter V-6 with 268 horsepower. Both engines come paired to six-speed automatic transmissions that route power to the front wheels. Horsepower numbers fall below some competitors, but they’re still class-competitive. Hey, we’re talking about family sedans here, not sports cars.

If you’re more eco-minded, Toyota will still offer its Camry Hybrid for 2015, available in sporty SE trim for the first time in addition to the long-available LE and XLE trims. Expect fuel economy to remain similar to the 2014 Camry’s 43 mpg city/39 mpg highway.

What does all of this mean to you? If you are searching for a Toyota Camry, but might want something with a bit more curb appeal, the 2015 model could be your answer. However, if you want a smooth, quiet and comfortable family sedan and the 2015 Camry seems a little too over the top, soon it’s going to be easy to find good deals on 2014 models as dealers start clearing their lots.

About the author: Journalist Jacob Brown covers the automotive industry and has written for publications like Motor Trend, Automotive.com and Automobile Magazine. When asked about how many cars he’s driven, he says that he lost count somewhere in the hundreds.