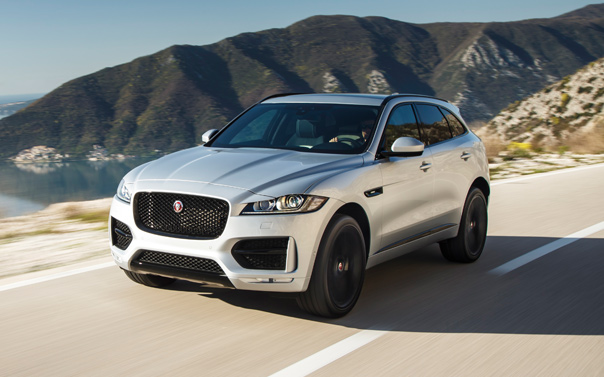 British sports car designers have historically created some of the world’s greatest roadsters. Countless examples from manufacturers, including Austin-Healey, MG and Triumph, have revolutionized automotive design around the world – and even inspired vehicles like the legendary Shelby Cobra and Mazda MX-5 Miata.

Today, many auto manufacturers have turned their attention to mass market crossovers and SUVs because of consumer demand.

One famous British brand driven by royals and celebrities alike, Jaguar, has recently moved into the luxury crossover space to attract a new group of customers. The legendary British automaker recently introduced Jaguar F-PACE and the public’s reaction has been overwhelmingly positive.

It all started at the Frankfurt Motor Show in 2013 when Jaguar debuted its “C-X17” concept to the world. Designers focused on distinct Jaguar-esque design cues with exciting proportions, clean lines and balance of form.

Two years later, the largely unchanged production version – a model with the moniker F-PACE – arrived at the Frankfurt Motor Show, where it completed the world’s largest “loop-the-loop” in an automobile, according to Guinness World Records.

“By remaining absolutely true to our design principles the all-new F-PACE is immediately recognizable as a Jaguar,” said Ian Callum, director of design at Jaguar. “It offers all of the interior space you would expect – and more – but because of our disciplined approach to surfaces, proportions, and purity of line, we have designed what I consider to be the most balanced, most attractive vehicle in its class.”

Even though Jaguar stayed true to its core customers, this car was designed to create new brand enthusiasts. Features targeted at younger buyers further differentiate this sport crossover from the competition.

Jaguar introduced a new wearable technology called Activity Key, a battery-free, waterproof and shockproof wristband that allows the key fob to be securely stored inside the vehicle, which the brand calls invaluable to sports like surfing and kayaking.

F-PACE’s interior is equipped with technology that rivals that of their competitors within the luxury crossover segment. A 10.2 inch tablet-style touchscreen and a customizable 12.3-inch high definition instrument cluster featuring 3-D navigation and a laser heads-up display ensure that drivers will always know where they’re going.

Jaguar has proven that while customers are looking for more creature comforts in today’s vehicles, world-class automotive DNA can exist inside any vehicle, regardless of size.